Kyrie is our rescue horse we acquired through Forever Morgans and AC4H in November 2011. Some people have the mistaken idea that Forever Morgans is a way to get a free or cheap horse.  Smart people know there is no such thing as a "cheap" horse ;-). My intention in making this web page is as a sort of diary, as with our barn building page, as well as to show other people a small part of the process that goes along with adopting a rescue- or any horse, really.

I thought about where I would keep Kyrie, since it's always wise to isolate new horses (especially those who have been in auction situations, as Kyrie had been) until you are sure they are not carrying any respiratory or other infectious diseases, and until you can get them thoroughly dewormed. The problem is the only area I have to isolate horses is fairly large and it would be difficult to find and pick up all the manure in there.  Something made me think about a small strip along the front of our property, bordered on the back side by one of our smaller pastures that is fenced in horse fence (as is the rest of our property), and on the front by old field fence. The area had been nicely cleaned of brush by our neighbor's goats, who have had the run of it (in addition to their own pasture) for several years. I ran my thoughts by Jim, since he would have to be the muscle behind this operation if it was to succeed. At first he said he thought it was too small. Well, yes it is small, but not a whole lot more than our drylot. The beauty of it was to make the maximum use of our (too-small) property by reclaiming a section that was not currently being utilized by our horses. It was isolated from the rest of the herd as long as I did not use the pasture adjoining it, and I thought it would not take much money to fix up the field fence enough with hot wire (replacing the barbed wire that currently topped it) to make it serviceable. After clearing low branches that might injure a horse, and burning off those and others that had come down or been dumped in the area, we went to Tractor Supply for a gate. The new paddock also needed a ditch filled in. 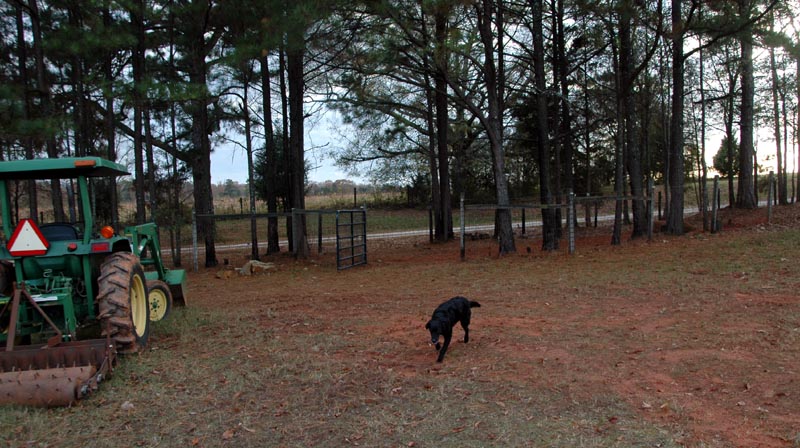 Above, Sophie is "helping" me bring pine straw in to go over the fill dirt in the ditch. She loves the new paddock as there are chipmunks to chase in there :-). Here's the new gate. The dirt pile was dumped to the right of the tractor and then moved into the ditch on the other side of the fence. The pine straw will help keep the new dirt from being churned up under Kyrie's hooves. Originally I had just thought of putting gravel over the dirt, but after spending the money on the gate ($100), hot wire insulators (about $30) and the dirt ($120), we decided to just be conservative. Pine straw will also be easier on newly barefoot hooves that are recovering from years of wearing shoes. 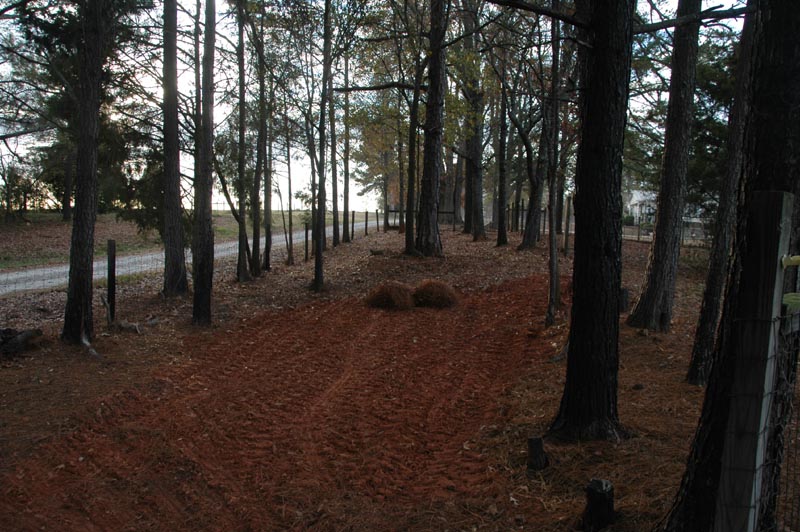 Here is the dirt in the ditch, flattened and compressed by the tractor. The first two wheelbarrow loads of pine straw are there in the middle of the picture. Thankfully the pine straw was free! I gathered it from under an old pine in our backyard, and more is constantly being added by all the pine trees in the paddock. The field fence is on the left, along the road. After patching it as best he could and removing the barbed wire topping it, Jim decided it was in too bad of shape and too low in spots, even though we were planning on adding smooth wire and hot wire on extenders above it. 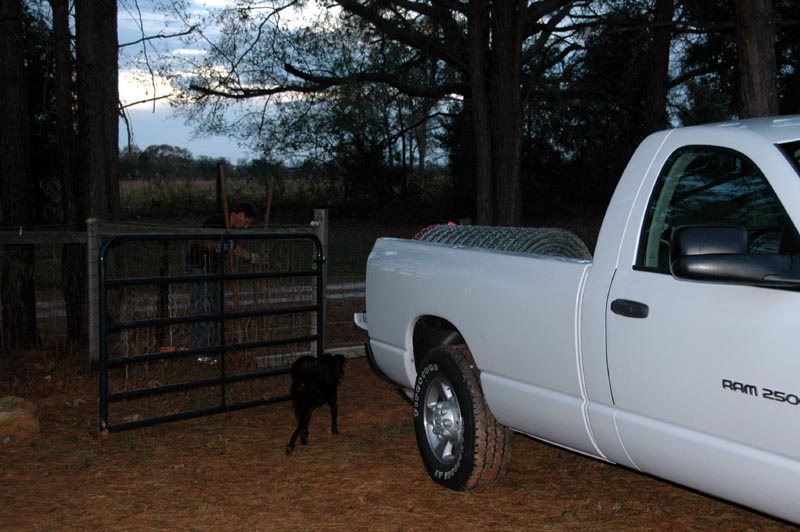 So.... back to Home Depot and Tractor Supply for a roll of no climb horse fence ($270, which is $100 more a roll than when we built this place 14 years ago!), fence staples ($4) and 14 new posts ($6 ea = $84) to re-do the section along the road. This will make it match our other fence, which is already on one side of the new pen since it flanks an existing pasture. The area is approximately 130 feet long by 24 feet wide and is only meant to be Kyrie's home until we can get her thoroughly dewormed and fecal checked clean. We'll put a round bale in there for her so she always has munchies, which should also help soothe any tummy issues she may have. It is small enough that I can remove the manure from it daily. It will make a great part-time paddock for a stallion, should I ever have one again, and I may use it as another drylot for some of my fatties ;-) 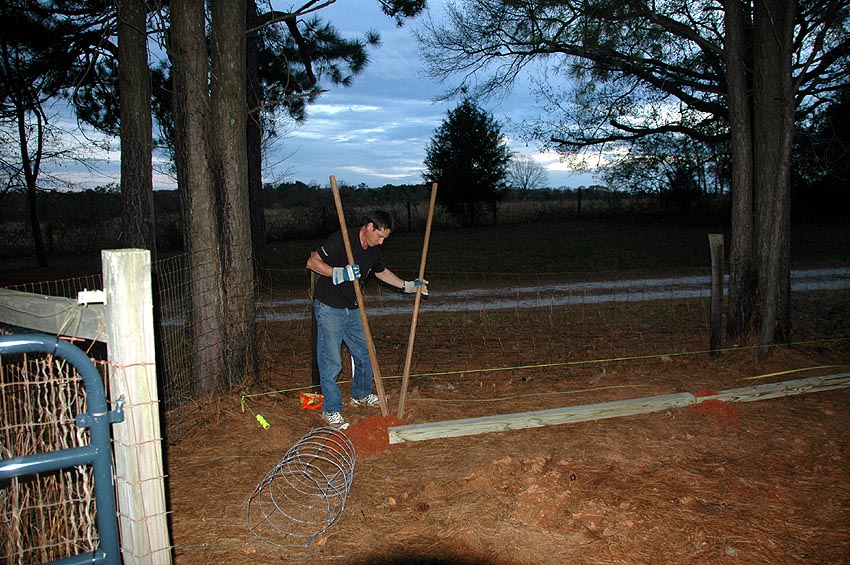 Jim working on digging post holes. He got them all started before dark this evening (11/27) and we'll wait for rain (and the water we put in them with the hoses ($60) we bought to reach the area so Kyrie will have water) to soften them enough to finish. Hopefully we will not hit the cablevision ;-)

Here are the posts laid out and new holes dug. Nellie is supervising and Sophie is a bit further back in the paddock (see the glowing eyes?). Jim is moving the fence line in just slightly to avoid the trees, some of which have damage from the old field fence. This way, as they grow, the fence will not grow into them. I guess we could make a paddock on the cheap with just hot wire and those step in posts but that's really not too safe for long term fencing, particularly along a road or property perimeter (we have in the past used it inside an existing fence for temporary cross fencing). The field fence would probably suffice especially with the planned hot wire topper but with a couple of broken fence posts and it being low in spots it is better to just do a remodel. We would rather have the peace of mind of knowing the fence is safe and sturdy, with the hot wire only an adjunct rather than being the entire fence. 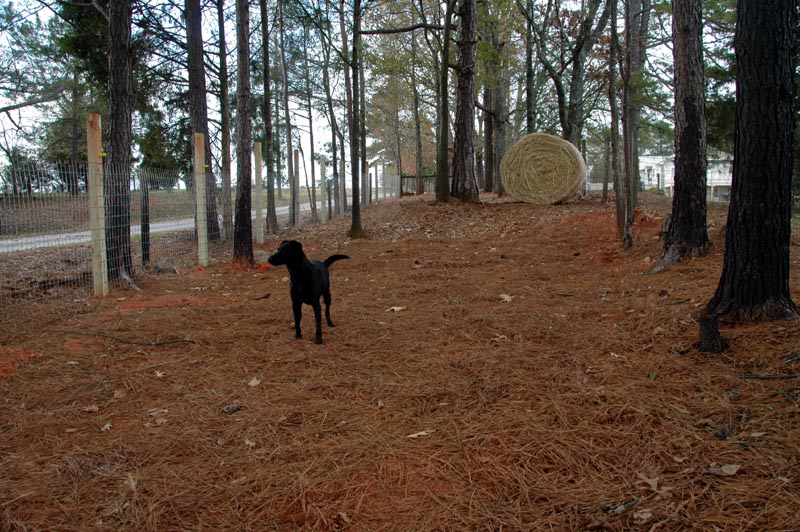 12/4/11- All done! Posts installed and new horse wire attached. The posts might get trimmed sometime ;-) Probably 2/3rds of the ones on the rest of the property have never been trimmed. A neighbor helped Jim a lot and they got it all done in about six hours, including cutting down a dead tree that was along the new fence line. The round bale is some nice rye we were lucky to find and still had to drive over an hour one way to get. It is positioned about halfway down the new paddock, which is long and skinny. The water trough is behind me, beside the gate. Nellie is giving her stamp of approval to the proceedings and Sophie is somewhere near the back hunting chipmunks. We were all ready for Kyrie's arrival the following AM! Back to Kyrie's page
Back to Brookridge Morgans home page